When I was in the University in the late 70s in Australia, during the time when the first Apple computers were being released in 1977, I made a decision to do a dual major for my undergraduate program to be in Accounting and Computers. I chose an Accounting major as I followed my father's advice to become an Accountant. His rationale was acceptable as he felt whether, in a boom time or recession time, accountants would still be in demand. I added computers to make it a dual major as I knew it would be something that might even change the future of Accountants besides the likelihood I felt that it would change the world also. Another point I like to highlight in my decision to add on computing subjects to my major was that I noticed most who majored in accounting seemed to fail in the computer subjects they took while the opposite was also true in that those who were computer science majors seem to fail in their accounting subjects. I therefore just felt that if I could handle both subjects as majors when I came out to the working world, I would definitely be at an advantage.

Why was it difficult for one to handle both subjects?  I found out in due course that while accounting required a lot of study of principles and practice. The computer side required a lot more practical and most students had to spend hours on the computer terminals getting used to the computer programming language which in those days was namely Basic, Cobol or Fortran that we were practicing on. Most computer students had to work into the late hours of the night trying to solve logic problems in programming etc to finally achieve a working program without 'bugs' or errors during execution. It was hard to study accounting principles and conventions than to practice on posting transactions to ledgers to derive reports and find enough time and energy to sit in front of a computer terminal to practice on a new programming language. A lot of time was needed to be spent almost like 'playing' on the computer to test the various logical routines that were creatively written in the new language and to edit or rewrite them each time an error or 'bug' was discovered!

Hence one needed to have good time management as well as to have lots of self-discipline to study theories when required as well as spending enough time on practical exercises whether in accounting or computer as both needed lots of practice time, especially on the programming side in the field of computers.

After I graduated and finished working to be certified as a Chartered Accountant, I started a business that launched me into the information technology industry to this day. I had known all along, during my university days that accounting and office work could be handled by computers. Essentially accounting, finance, administration and a host of businesses are actually all information based which is why another term for the computer industry is the information technology industry. The once industrial society was rapidly already transforming to become an information society. I transformed myself along with the trend of change and while mastering historical disciplines I could adopt, innovate and even create new technology and strategies to produce optimal results in the business world as well as in the new information society. I became a unique management consultant for businesses and eventually a writer too. 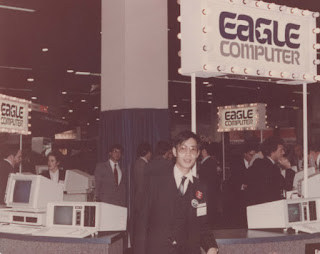 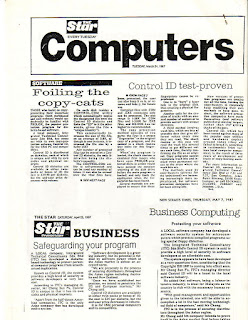 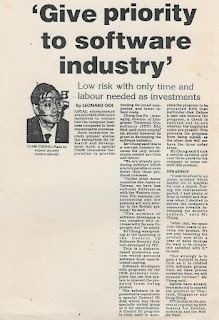 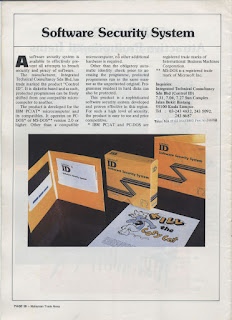 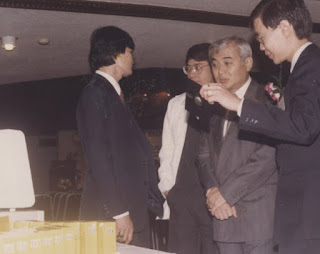 From purely business applications, the computer and related technologies could now be used for social purposes by end-users where the software and hardware had innovated to become more a tool suited for communication and entertainment. Besides large mainframe computers, computing power could be transferred to Minis and PCs, then to laptops and eventually to touch Pads and the handheld devices known as smartphones. The personal use of the latest information technology created a new application called 'Social Media'.

Managing an Information Family and Society

The advancement of science and technology led to a quantum leap in the accessibility of information that began to change societies in the world. The common programming languages from Basic, Cobol or Fortran has changed to C++, Html, and Java.  End-user applications from emails to chat messengers and social media sites, I had witnessed developments in my own family of a long term courtship via the internet that was inter-continental which led to a successful marriage.  I had also observed the children socializing with net games that interacted with other family members and friends which seem to help them reduce the stress of their world. As a family, when we cannot get together physically to celebrate birthdays or other special days, we could all hang-out together online in live video chats from our different locations. We do our best to maintain close family ties with family members who are at this point of writing are spread out to 4 corners of the world, at one time covering USA, China, Singapore, Malaysia, Australia, and the UK.

I knew our family members would have deep roots in the information society because as a pioneer of the information age, I was the one who exposed them early to the technology. However, I never had the mindset to influence or force any of the children to make their career centered on the computer or digital technology. Free agency is important for them to discover their own interest and talents. The oldest boy from a Liberal Arts program in Yale-NUS in Singapore did decide to become a computer engineer to be hired by JP Morgan soon after graduation. From the voluminous daily data collected by companies such as Google, Apple, and Facebook, Deep Learning was necessary using mathematical or statistical formulas to study trends in consumer behavior to provide useful information for businesses seeking to zero in, to the right customers.

Latest News on my own personal development reflects my adaptability to change and my commitment to keep up with the changes in the information society we live in. Change is something young minds are supposedly more adept in achieving but I seem to defy this conventional belief. I attribute it to the fact that the information updates I have been constantly receiving due to the constantly improving information technology available to me have kept me up to date with the young generation. Furthermore, not everything that I've learned in the 'old days' or what they call history is of no use. In fact the new information combined with old knowledge I possessed that the young do not have, primarily due to different habits in their lifestyle, or focus attention, put me in a more advanced state of mind to solve work or life's problems or perform many other functions that the young are somehow less adept in doing. They have for instance lost the art of conversation thus the research that I started in the early beginning of the 21st century with the acronym OPTION, is paying off today so to speak. I am also equally adept in the deduction or induction method of problem solving required in our fast changing world today.

The research involved being engaged in family developments and society's myriad activities with people of all varieties in age, race, nationality, religion or economic status. I was very interested and focused on studying the nature of Man and the human Mind. With advanced information technology of social media which facilitated my private University of continuous learning, I had my mobile campus that followed me wherever I go. The teachers were the huge network of friends and family members I had built in my life whom I would connect with them in real-time or cyber time and my notes were the online journals that I maintained, many open and some closed for privacy reasons.


My notes are not restricted today with just words that I am typing now but I can use hypertext links, photo links and video links covering what I have summarized as the BODY MIND SPIRIT multi-dimensions of the human being that I have perceived. The BODY-MIND association is today well accepted by science and medical doctors, who once didn't trust Mind doctors like psychiatrists or psychologists thinking they were from a fairly vague or too subjective field of science. Like computer science or technology, the field of Science is ever progressing and expanding like from Newtonian physics to Quantum Physics and I'm told by a Noetic friend that the latest direction is Unified Field Theory.

Videos have become a very useful source of information like the way the YouTube website today has become a search engine for information. Watch this video to understand the impact of technology to human conversations and our minds too :

From the added links to the above paragraph to explain the terms used, the reader can tell my writing is shifting towards describing a deeper part of the human mind which has created theories and hence a set of terms or vocabulary that may cause the average reader to be more challenged to understand what is conveyed! I was the pure science stream student in school but changed to commerce for my tertiary education. As I matured in the business world, I gravitated more towards computers and it's related industry. The main motivation for this I felt was that I preferred to be involved in the creation or development of a product or service that is practical and produces accurate results with no room for guesswork or attempts to disguise what is false to be sold as being true. (Refer to my journal covering the SPIRIT dimension of my life.)

The 1 or 0 binary system used in computers is either true or false and coming from a pure science stream of training, I gleaned more towards scientific truths and its related theories that can actually create real and tangible results. I will move on next to a more challenging field of the MIND-SPIRIT part of advancement in scientific research but before that, have a look at the video below to appreciate how scientific theories can lead to practical applications, sharing important truths of life that some times can only be proven later or given empirical evidence to support it: